'Tis the Season to be more than trivially helpful. . . 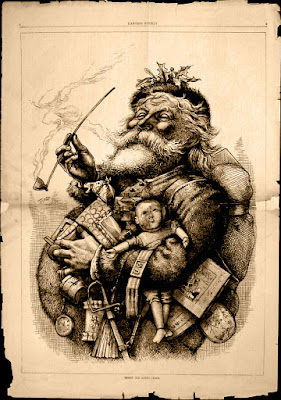 I mentioned this on mic last week, but it bears repeating.


We are still collecting cash and donations for for Project Saint Nicholas Returns.
It, along with many other items will be in Frank's annual Christmas Auction, which is:

You can bid on great items, and have a great night out, for a wonderful cause.

ALSO - Frank's Crew Members Kaci and Tara will be taking the Polar Plunge for PSNR the next day in the freezing cold Portage Lakes.

PLEASE consider making a donation, either of goods or cash.

Instead of a pre-show question any donations (cash or auction items) will enter your team into BOTH drawings - the SHOTWORTHY drawing and the PRIZE drawing.  Since I am asking for contributions instead of knowledge, the PRIZE drawing will be a collection of several cool items from Unbox Akron.

Here's something I wrote last year, and it's still applicable:

I usually have a random link or two, some goofy images and some attempts at humor.
I’m giving that a bit of a miss today.

I’ve been hosting Trivia nights since May 2012.
I have a great time.
I look forward to it every week – it’s a time to connect with friends, make new ones, perform a little and have a drink or two.
I’ve made a few attempts to turn it into a bit of a community.

By coming out each week, or even replying to my emails, or liking a FB post you’ve given me a great gift.
I’d like to pay that forward, and I’ll need your help.

Frank’s supports a bunch of local charities, and one of their big efforts is their auction in December for Project Saint Nicholas Returns.

You can follow the link to see much more of what they do, but the gist of it is similar to many other Christmas themed charity efforts – provide gifts and support to families in need in the Christmas season. What really jumps out about them is from their “About Us” page. 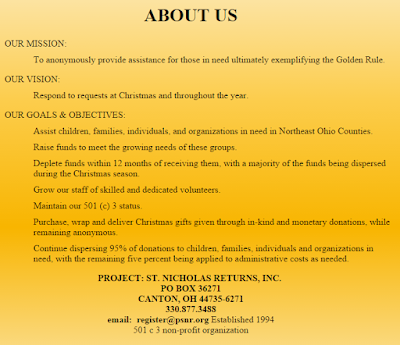 Yes – their stated goal is to distribute at least 95% percent of what they take in.
Give them a dollar, and at least $ 0.95 should get to people in need.

That’s incredibly efficient for a charity – some ratings sites consider anything over 75% as “Good.”

I’d like to support that effort, and I’d love if you could help!

One of PSNR’s biggest annual fundraisers is an auction held each year at Frank’s.
This year it’s on Friday, December 2 at 9pm. (UPDATED FOR 2016)

I’d love to put together a basket from the Akron Triviators.
* * * *